The MegaPoint system is a family of devices which communicate with a central computer through a single twisted pair cable.

A switch card has 8 channels 16A whereby one card can supply 2 switchpoint heating systems. Each computer can control up to 10 switch cards.

Phase slice power control is easy and can be made to provide smooth control. It is so difficult and expensive to keep the radiated and conducted interference down that it is rarely used. To illustrate this, there is a MegaPoint “Variac” driver for the control of large lamps that need continuous and stable power. For all other purposes zero crossing burst fire is appropriate.

Even so, conventional burst fire techniques have two significant problems. A typical technique is that for 30% power the power is delivered for 30 half cycles and switched off for 70. This causes heavy flicker even in quartz heating elements. It is not uncommon for all heaters in a multi-heater machine to synchronize, and it has been known for the building lighting to go up and down as the heaters go down and up!

The second problem is more subtle. It is not unusual for a heater to load the utility transformer to near its capacity. Counting half cycles means that there will be times when all heaters are receiving an odd number of half cycles. Sometimes these will average out, but occasionally they will not. This represents a DC load on the transformer.

Delivers power only in full cycle bursts which start on a voltage crossing and end on a current crossing. These cycles are spread out as evenly as possible. Thus the load is made as even as possible and has no (appreciable) DC component.

The MegaPoint 8 Channel 16A Triac Assembly

Each of the eight power connections can therefore be treated as a single pole switch which are closed during full cycle bursts which start on its own voltage zero crossing and end on a current crossing of its own.

With many heaters all individually controlled there is the chance that, from time to time, all control channels will do the same thing at the same moment. Overheating of the transformer, perhaps even damage, is a possibility. To avoid this, the MegaPoint system always cuts WHOLE cycles.:

A full sequence period is ninety six cycles. At “one per-cent” drive there will be one full cycle of power and then a gap of ninety-five. At “two percent”, the gap will be forty-seven. After that it cannot always be perfectly even, but it is as near to being evenly spread out as possible. 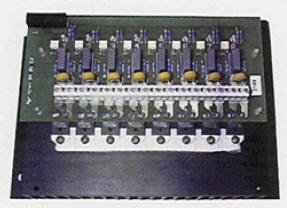 A 20 way IDC ribbon cable is used to link one, two or three switch assemblies to one control card.

Proper control of temperature is very important for the reliability of semiconductors. Keep within the rules, and their life is virtually indefinite.

The switch assembly heat sink can be cooled by any convenient method. The design brief foresaw these units being used in groups, perhaps ten or twenty together, and so it was important that the hot air leaving one should not materially heat the next.

On larger installations, the size of the holes differs some-what to allow for proximity to the fans and also to compensate for the fact that the air reaching the upper heat sinks is inevitably a little warmer than that passing over the lower ones. 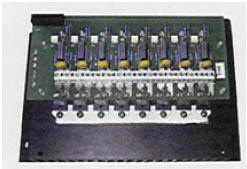 Radio-frequency energy emitted as electro-magnetic radiation or conducted back up the power feed cables has been investigated using MegaPoint.

Since any actual installation includes everything from internal devices to external cabling, if full certification of a particular installation is required, it will be necessary to test the whole machine in its final form in its working position.

Every installation will of course be very different. Where tests of complete systems have been made the array and control system were set up in the array manufacturer’s assembly shop. Emissions were found to be much too small to be measured accurately but were clearly well within limits.

Over the years that these devices have been in use we have not heard of a single report of problems.

The Standard Way of Mounting the Switch Assemblies

The MegaPoint system has been tested by SP in Borås for England and passed with excellent results.

If requested, we will send copies of the report. The report is scanned in below.

Every installation will of course be very different. Where tests of complete systems have been made the array and control system were set up in the array manufacturer’s assembly shop. Emissions were found to be much too small to be measured accurately but were clearly well within limits.

Over the years that these devices have been in use we have not heard of a single report of problems.